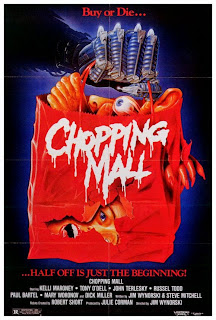 Chopping Mall (1986) VHS
- Another title I wanted to give one more watch before selling (I’m selling off my VHS collection to make space). This has always been a favourite of mine. I mean, come on, it’s about killer security robots hunting and killing young people in a mall at night. How could you not love that? I’ve previously reviewed this as part of the Corman-ia 2011 marathon - see that review here (www.moviegeeknz.blogspot.co.nz/2011/06/cormania-2011-chopping-mall.html) 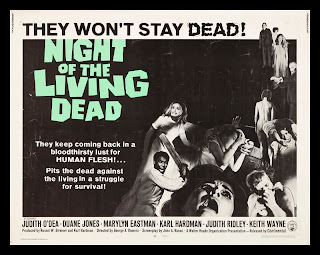 JUDGEMENT MAY: Night of the Living Dead (1968) DVD
- I’ve decided that for the remainder of May the month’s theme will be post-apocalyptic/end-of-the-world movies. And what better way to kick it off with the zombie apocalypse movie that started it all. My girlfriend had never seen this before, making it an even better choice to get this theme underway. Obviously I don’t need to say anything about this one that hasn’t already been said. Absolute classic.

Firepower (1993) VHS
- I had this one sitting among the many piles of VHS I’m setting about selling from own collection, and hadn’t really given it any thought. That is until I saw a trailer for it on another VHS, and found out that the one and only Ultimate Warrior acts in this! My favourite WWF guy from the late 80s playing a bad guy called The Swordsman? Yes please! In the future year of 2007 (hehe), some cities are designated as lawless zones where the police don’t dare to go. But two rulebreaking cops (Steve McQueen’s kid Chad and former world kickboxing champ Gary Daniels) go in under-cover to catch a major bad guy, and fight their way through an underground fighting league (where the aforementioned Swordsman is the champ). Lots of in-ring action (punch/kick fighting and weapons), the best of which is when Daniels is featured. Predictable but good mindless fun! 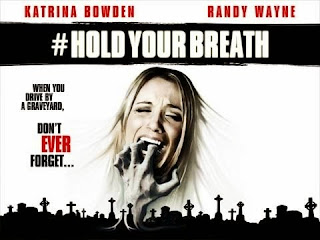 Hold Your Breath (2012) DVD
- Last May the theme here on Schlock to the System was “May-de to be Mocked” (mockbusters), during which I ended watching way more The Asylum flicks than is entirely healthy. Fast forward a year and I pop on this slasher, not knowing a thing about it, and during the opening credits… yep, it’s produced by those purveyors of budget-conscious tripe, The Asylum. Apparently this was the first movie they ever released to cinemas - I feel sorry for whoever paid cinema ticket prices to sit through this one. Low-budget slasher based around an executed criminal whose spirit jumps from body to body. Think The Fallen without the budget, or the plot. Or anything really. Definitely worth skipping. 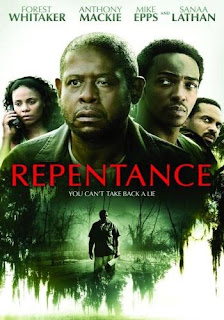 Repentance (2013) Netflix
- I watched this under duress after my girlfriend chose it for our night’s viewing, and found it to be not too bad. It has a good cast, including the always-dependable Forest Whitaker and Anthony Mackie, and a plot that starts off predictable but takes a few twists and turns. A little too corny and preachy for my liking, but the good acting and some intense torture scenes kept me in it until the end. Not bad if you’ve got some time to waste and are looking for something to watch. 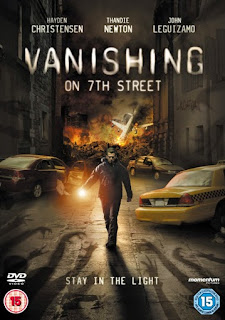 JUDGEMENT MAY: Vanishing on 7th Street (2010) DVD
- What drew me to this movie the most (apart from the fact I picked it up secondhand for extremely cheap) was director Brad Anderson. I love two of his early movies, Session 9 and The Mechanic. While this doesn’t live up to those, it’s still a solid watch, especially if you’re fascinated by post-apocalyptic movies like me. In this case it’s an end-of-world scenario where most of the world’s population disappears in an instant, leaving just a few confused survivors (including ol’ Annakin Skywalker himself Hayden Christensen and John Leguizamo in a rare non-comedic role). When the enemy is revealed to be shadow creatures, the survivors must stay in the light at all costs. Anderson once again shows that he knows how to build suspense (the gimmick here allows him to re-use a few “lights going out” tricks from Session 9) and while there’s nothing overly memorable about Vanishing on 7th Street, I can give it a mild recommendation.

Posted by fletchanator at 1:05 PM No comments: 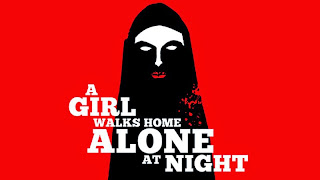 A Girl Walks Home Alone at Night (2014) Netflix
- There’s been a lot of hype about this movie online recently, and not all of it positive. I’ve heard some horror fans complain that “it’s not a horror movie”, and in some ways they’re right. It’s more of an arthouse movie (shot in black and white) with some horror elements. I dug the unique setting (California doubling as Iran) and most importantly found the leads to be compelling. The comparisons with Let the Right One In are unavoidable, and while it’s not quite as good as that one, it definitely deserves plenty of praise. 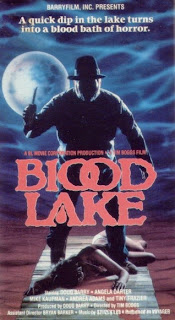 Blood Lake (1987) Youtube
- I’m a sucker for obscure genre flicks that haven’t been released on DVD. Bored one night at work, I found this on Youtube and settled in for a viewing. Yikes is this one bad. Plotwise it is your atypical slasher - group of teens spend a weekend at a lakehouse and get picked off by a maniac. But what makes it so excrutiating to watch is the acting. The cast of unknowns, many of whom didn’t act again after this, look absolutely lost on camera. They stumble through their lines and spend most of the time looking around as if wondering what to do next. The action doesn’t begin until 45-minutes into the film, before that we’re treated to such pleasures as watching the teens waterski and play drinking games, all in the most unexciting manner imaginable. Blood Lake is only for the most masochistic of B-movie fans. 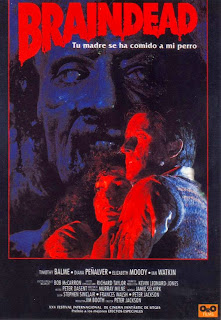 Braindead (1992) VHS
- I’m in the process of selling off my rather-large VHS collection, as I just don’t have room for them anymore. My girlfriend had never seen this New Zealand classic, directed by the one and only Peter Jackson, so I threw it in the old machine for a watch before I sell it. This copy is the American one, titled Dead Alive, but it’ll always be Braindead to me. Simply put, this is one of the greatest horror comedies ever made. From the kung fu kicking Priest (“I kick ass in the name of the Lord”) to the gory-beyond-words lawnmower finale, you can’t go wrong with Braindead. 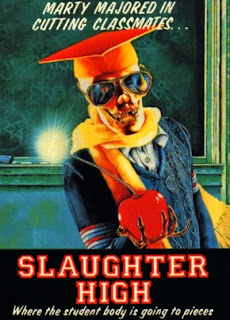 Slaughter High (1986) VHS
- Another one I decided to pop in for a watch before selling. Not the greatest 80s slasher, but any fan of slashers is going to have a good time watching it. The premise is very similar to 1981’s The Burning, but instead of a caretaker falling foul of a teenaged prank, it’s the school nerd. Like Cropsy, said nerd exacts his revenge on the perpetrators, some 10 years later at a school reunion.

Blood Rage (1987) AVI
- AKA Nightmare at Shadow Woods. Apparently this was made in 1983 but not released until 1987, which is never a good sign. Another obscure not-on-DVD feature (although apparently it will be getting the Blu Ray treatment from Arrow later this year). However, unlike Blood Lake, this one has better acting and some good gore. The plot is also moderately interesting, featuring two identical twins, one of whom is a psychopath. Not a bad little twist at the end too. 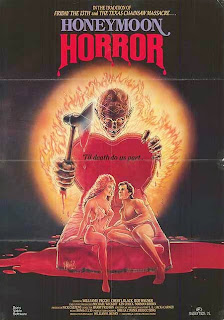 Honeymoon Horror (1982) AVI
- Yet more not-on-DVD obscurity. Three sets of college couples, newly married, head to an island getaway for their honeymoon, where they are killed by a mystery psycho. I say mystery, but even a coma patient will guess who it is well before the reveal. Bad acting, awful sets, this one has the lot. There are a couple of decent gore kills, but not enough to make this one recommendable. Not even for cheese factor, because apart from a hilariously-wacky small-town sheriff there’s just no fun to be had here. 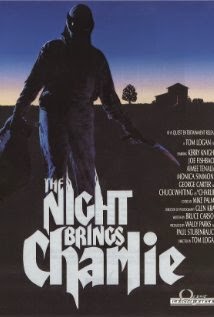 The Night Brings Charlie (1990) AVI
- Finishing off the trio of obscurities I watched in one night was this Orlando-shot slasher with yet another cast of nobodies. By 1990 slashers were becoming old hat, and this one recycles all the old cliche stuff (including a scene taken straight from a Friday the 13th sequel, in which three bikers are taken out in a barn). But what it lacks in originality this one makes up for with an interesting killer at least (the titular Charlie, wearing overalls, a sack on his head and goggles), a decent twist and some above-average acting. 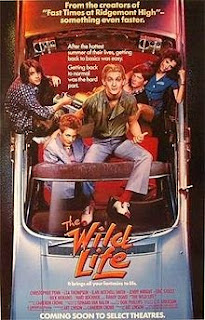 The Wild Life (1984) VHS
- I always wondered why I’d never heard of this movie before. After all, it was written by Cameron Crowe (FAST TIMES AT RIDGEMONT HIGH, ALMOST FAMOUS etc) and has a pretty good cast of young 80s talent (Chris Penn, Eric Stoltz, Lea Thompson, Jenny Wright). But after watching it I can kind of see how it slipped through the cracks and didn’t become as well-known as other 80s teen comedies. There’s nothing wrong with the acting - Penn is great as the carefree party animal and Stolz is solid as his more conservative buddy - but the script just seems to lack the spark of Fast Times, while covering the same type of ground (teen life set around malls, school etc). Solid but hardly a classic.

Posted by fletchanator at 11:56 PM No comments:

Like that pesky slasher villain who just won't stay dead, Schlock to the System is back. It's been almost a year since I posted anything on here, but I'm going to start posting again.

I'm not sure how many full-length reviews I'll be doing, but at the very least I hope to post weekly "What I watch this week" updates, with short reviews of every film that passes before my eyes.

Posted by fletchanator at 8:45 PM No comments: