I've been a bit slack at posting reviews over the past month - blame Christmas and the summer holidays.

Here's a catch-up on a few movies I watched at the end of December... 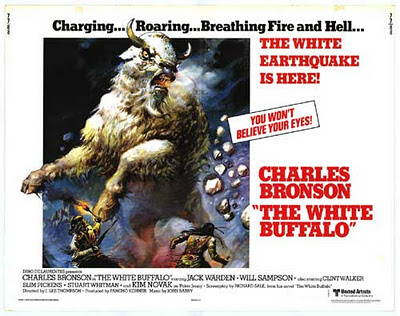 The White Buffalo (1977)
Director: J Lee Thompson
Starring: Charles Bronson, Clint Walker, Jack Warden, Kim Novak
Format: DVD (MGM)
This Charles Bronson vehicle starts with a great opening dream sequence that introduces the titular White Buffalo in a way more befitting of a horror movie than a western. Another similar scene has the buffalo stampeding through an Indian village. Both use smoke, lighting, music and camera work to bring an effective atmosphere of dread and terror.

Sadly, the rest of the movie doesn't quite measure up, but as a standard western it's definitely worth watching.

Adapted for the screen by Richard Sale, from his own novel, White Buffalo tells the story of Wild Bill Hickock (Bronson) as he returns to the old West under an alias, in search of the White Buffalo that is haunting his dreams. It is directed by J Lee Thompson (helmer of classics THE GUNS OF NAVARONNE and CAPE FEAR and underrated 80s slasher HAPPY BIRTHDAY TO ME).

The first half of the movie is mostly concerned with reuniting Hickock with old acquaintances, some who are glad to see him, but most who aren't. He travels through frontier towns, saloons and open country putting lead in an assortment of low lives along the way.

The second half deals with the inevitable showdown with the buffalo, where he teams up with disgraced Indian warrior Crazy Horse (Will Sampson, THE OUTLAW JOSEY WALES), who is seeking revenge against the buffalo after it killed his child during the aforementioned village stampede.

The plot has a few gaping holes (Hickock goes from saying "the only good injun is a dead injun", or something to that effect, to becoming buddies with Crazy Horse in the blink of an eye), but the storyline's solid enough, if fairly predictable.

This movie's strongest point is its cast. An array of familiar faces appear briefly on screen - Slim Pickens (BLAZING SADDLES), Ed Lauter (THE LONGEST YARD), John Carradine (father of David, Keith and Robert), Stuart Whitman (THOSE MAGNICIFENT MEN IN THEIR FLYING MACHINES) and Douglas Fowley (MIGHTY JOE YOUNG) among them. There's even a brief cameo by the sensei of Cobra Kai Dojo, Martin Kove.

Leading the supporting cast are Clint Walker (CHEYENNE TV series) as the treacherous Whistling Jack Kileen and Jack Warden (THE CHAMP) as Hickock's friend and Indian-hater One-Eye Charlie Zane, the latter stealing any scene he's in.

Kim Novak (VERTIGO) also shows up as Poker Jenny, a widower and former flame of Wild Bill. Middle age had hit Novak by this stage but she was still plenty beautiful.

Bronson's effective enough in a role that suits him (more shooting than talking), although there are some awkwardly-acted interchanges with Sampson. All of the hand gesturing and slow talking gets a bit embarrassing, as does the scene where Hickock, Zane and Crazy Horse sit around a fire debating race relations.

By the time the climax arrives too much talking has killed the anticipation, but the conclusion is equal parts silly and schmaltzy anyway.

As for the White Buffalo itself - the "monster" uses basic practical effects rather than any kind of CGI (which even in 1977 - the same year as Star Wars was released - would have been possible), but in a way they add to the dream-like nature of the buffalo scenes.

The White Buffalo is worth watching just to see a movie about a killer buffalo (are there any others out there?), but be prepared for a strong first half and a weak second half. 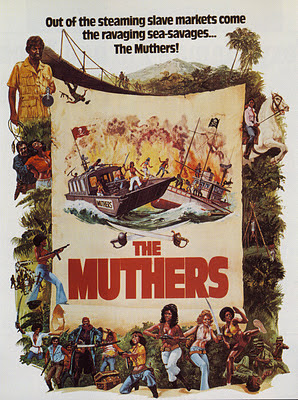 The Muthers (1976)
Director: Cirio H Santiago
Starring: Jeannie Bell, Rosanne Katon, Trina Parks
Format: DVD (Umbrella)
This slice of Filipino exploitation is featured in full as a special feature on the DVD release of Machete Maidens Unleashed (2010), a documentary about the Filipino b-movie craze of the late 60s, 70s and 80s.

The kings of this sub-genre (Roger Corman, Jack Hill, Cirio Santiago etc) had done a string of "women in cages" flicks and had ventured into blaxploitation. What to do next? Why, combine the two of course!

When Kelly's sister goes missing, the two butt-kicking mamas go undercover inside a prison camp to get try and ger back. They meet prisoner Marcie (Trina Parks, DARKTOWN STRUTTERS), who shows her the ins and outs of the prison and also come across the prison boss's favourite girl, Serena (Jayne Kennedy, DEATH FORCE). And what do you know? They all take a shower together.

After one escape attempt is thwarted they learn that Kelly's sister has been killed, but are determined to get free. Serena joins them, the four foxy chicks taking on the jungle and the bad guys as they seek freedom. Stopping to bath naked in a river first of course.

The escape and resulting battles feature lots of machinegun fire, as you'd expect, but are sadly skint of explosions, bar a few minor ones in the climax showdown.

While the acting is better than I was expecting (the butt-kicking chicks get the majority of screen time, but Filipino exploitation regulars Ken Metcalfe (THE WOMAN HUNT), looking like George Peppard in The A Team, and Rocco Montalban (THE HOT BOX) also feature), the action is nothing special.

Machete Maidens Unleashed tells us good Filipino exploitation should feature the three Bs - breasts, blood and beasts. It has a good amount of the first one, not much of the second one, and it's not the right sub-genre for the third one (although the prison camp boss could be considered a beast of a man I suppose).

While The Muthers ticks the boxes in terms of T&A (albeit without the lesbian action that usually comes with with WIP flicks), it comes up short in other areas. It could have done with more action set pieces and the torture of women (a standard of WIP) is fairly tame.

In other words, for an exploitation movie it's not overtly exploitive, when compared with others from the genre.

Finally a word on Machete Maidens Unleashed: It's a good documentary with lots of footage from Filipino exploitation movies, and input from a lot of the major players. It tells the story of the genre well and will be enjoyed by anyone who enjoys low budget action flicks. 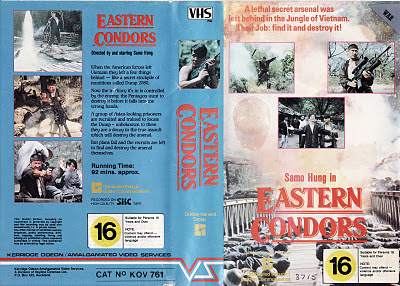 It's soon after the US pulled out of Vietnam, and Uncle Sam is eager for a hidden munitions dump not getting into the hands of the VC. The Army collects together a group of Asian-looking criminals and sends them in behind enemy lines to destroy it. During their mission they gain allies in the form of Cambodian rebels (a group of hot, kung fu chicks), but they are captured by the VC and it becomes clear a traitor is in their group. Who is it?

I'm going to admit here that I was distracted while watching this movie, and ended up missing quite a lot of plot. Did it detract from my enjoyment of watching Eastern Condors? Not one bit!

The cheesiness factor is quite low - only the comically-bad voice overs register on the cheese scale. The rest of the laughs are intentional, and although it gets a bit silly in places, the comedy doesn't detract from the action.

And what action there is! We're not just talking about run of the mill gunfights and explosions. The kung fu fighting is creative and at times breathtaking - I guess that's the beauty of having an actual martial artist behind the lens.

Fast-paced and fun from start to finish, action fans won't be disappointed by Eastern Condors.
Posted by fletchanator at 8:04 PM No comments: