Here in New Zealand (and Australia) a company called Flashback Entertainment has started releasing a series of 5-movie budget sets, sometimes on 5 discs, sometimes on 2. They're across various genres and cost $10 each. I've been picking up a few of them and decided I would sit down and watch one of these sets to see how good or bad they are, and give my thoughts in one review... 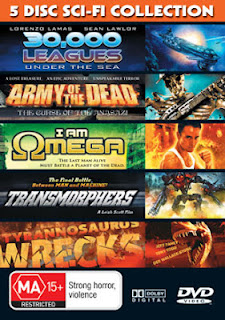 Plot: A nuclear submarine is attacked by a giant squid and sinks to the ocean floor. A team of specialist retrieval experts (led by Lamas) is sent in to recover it, but discovers an undersea city controlled by the evil Captain Nemo (Lawlor), who's out to destroy the land-based world.

Comments: You've heard of Jules Verne's classic novel 20,000 Leagues Under the Sea, right? Well this is *30,000* Leagues Under the Sea - that's 10,000 Leagues more awesomer!
Actually, no. This straight-to-DVD low budget film is from Asylum, kings of the cheap ripoff flicks. And boy is it bad. Not even ol' Renegade himself can save this steaming pile of crap. Lawlor's mildly entertaining, but the rest of the cast seem to be suffering from CGI-induced decompression sickness.
Surprisingly, the CGI's not that bad. It's just a shame the plot is so boring and predictable (full of standard fare like the male and female leads butting heads due to a rocky past relationship).
If the other four movies in this 5-pack are this bad, I don't know if I'm going to be able to make it through them all. Jules Verne must be turning in his watery grave!

Plot: College professor John Barnes (Kelly), his wife (Marchesi) and a group of friends go into the deserts of Mexico for a spot of off-road racing. But one of their group (Martinez) has another motive - to search for the fabled city of El Dorado and its mountains of gold. He finds it, but in doing so unleashes an army of skeleton warriors on the group.

Comments: Well, at least this one isn't a bastardisation of classic literature, or a straight ripoff of a blockbuster movie. So it has that going for it. But otherwise Army of Dead is a very-forgettable straight-to-DVD offering.
The storyline's passable, the desert racing set up allows for some fun action shots, and who doesn't like seeing an army of undead conquistador skeletons wreaking havoc? But on the downside the acting's excrutiating at times and the dialogue's terrible. What could have saved this movie is a high sleaze factor, but there's no T&A and the only gore is CGI-created.
Which brings me to my biggest gripe about Army of Dead. I'm not a fan of CGI, and so much of this movie's effects are generated on a computer. I can forgive CGI when it's necessary (like the giant squid in the previous movie or the skeleton warriors here), but CGI explosions? CGI blood? No thanks - I'll take a good practical effect any day of the week.

Plot: In the future, a race of alien robots have conquered the Earth, forcing mankind underground. After 400 years, a small group of humans develop a plan to defeat the mechanical invaders in the ultimate battle between man and machine.

Comments: At first glance (seeing the title without watching the movie) it's natural to assume this is a straight ripoff of Michael Bay's big budget Transformers movies. But after watching it I can tell the only thing it's got in common with Bay's trilogy is it has big robots. Some of them transform, kind of. Apparently this was originally going to be called Robot Wars, but the name was changed to cash in on Bay's blockbuster.
That's not to say that Transmorphers isn't completely derivative, because it is. Terminator 2, Cherry 2000, Screamers, any number of bad 90s sci movies - it rips them all off.
Transmorphers lives up to everything you'd expect from an Asylum movie - the acting is atrocious, the special effects look like they were created on an Nintendo 64 and the dialogue is grade school production bad.
I'll say this though - it's better than the first two movies I reviewed in this set. It starts off boring, but once the plot leaves the underground city and the fighting against the robots starts, there's enough to keep things interesting.
The dialogue will make you groan, the CGI/green screen effects will make you laugh... but hey, it's still better than the abortion that was Revenge of the Fallen (I didn't mind the first Transformers movie too much and haven't seen the third one).

Plot: Dr Harrison Parker (Jeff Fahey, LAWNMOWER MAN) has invented some kind of revolutionary DNA formula. He's at work late one night with a colleague (horror genre veteran Dee Wallace) when a group of corporate saboteurs (led by Candyman himself, Tony Todd) take over the building. In the process they unleash a living dinosaur on the city. As the dino goes a-chomping, the bad guys keep searching for the formula, which Dr Parker has hidden. A showdown looms between the good doctor and the leader of the baddies, who just happen to be old army buddies.

Comments: It was only when I sat down to watch this movie that I noticed the director's name. John Carl Buechler! A special effects guy who worked on a lot of horror movies in the 80s, before going on to direct a series of cheesy-bad flicks (Troll, Friday the 13th Part VII, Ghoulies III). Add to that a cast of washed-up genre veterans and it's fair to say my expectations were high!
And I'm happy to report this movie lived up to my expectations. But let me quantify that by adding that having to sit through the first three movies in this DVD set probably increased my enjoyment of Tyrannosaurus Wrecks (which is also known as The Eden Formula, a much lamer name).
What elevates this movie above the likes of 30,000 Leagues, Army of the Dead and Transmorphers is the acting (especially Todd, who hams it up), the comedy (which is actually, you know, funny!) and above all else its cheesyness. Tyrannosaurus Wrecks is at its best when the killer dino is on screen, a mix of stop animation and puppetry that's so unconvincing it'll have you laughing your ass off.
And unlike its aforementioned bretheren, this movie actually has gore! Sure, it's not the most convincing gore ever, but after sitting through three movies where the only blood was CGI-generated, I'll take multiple decapitations and body chomping any day of the week.
Tyrannosaurus Wrecks is a cheesy, fun, low-budget B-movie that definitely fits into the so-bad-it's-good category.

I Am Omega (2007)
Director: Griff Furst
Starring: Mark Dacascos, Geoff Meed, Jennifer Lee Wiggins
Plot: After a virus kills everyone on earth and turns the undead into zombies, Renchard (Dacascos) lives a lonely existence, roaming LA and killing zombies. But it turns out he isn't the last man on earth, and soon he's fighting against redneck militants (including Meed) as well as zombies, while trying to save the lovely Brianna (Wiggins).

Comments: The third Asylum feature in this set is definitely the best of them, but then that's faint praise isn't it? Taking into account its dirt-low budget, I Am Omega is actually a mildly-entertaining viewing experience.
This latest take on Richard Matheson's I Am Legend story unashamedly melts together that title (also used for the Will Smith version a few years back) and Omega Man, the 70s version with Charlton Heston. And let's not forget the best version of them all, Vincent Price's Last Man on Earth.
Taking a break from throwing out corny lines on Iron Chef America, Mark Dacascos (who I will always think of as the guy who replaced Brandon Lee as Eric Draven, taking up the mantle of The Crow for a late-90s TV series) is pretty good as the slightly-insane survivor. My only complaint is that apart from a short training scene and a tease involving nunchucks, Dacascos doesn't get to break out the martial arts. If director Furst had decided to go full hog and make this a cheesy guy-uses-karate-to-beat-zombies flick, it could have been legendary!
Instead we get a lot of boring set up in the first 45 minutes, before the action kicks in. But after that there's a good amount of bloody zombie-splattering and just barely enough plot to keep things interesting.
I know criticising technical aspects of a low-budget mockbuster doesn't make sense, but the editing (choppy in places and with long black screen transitions in others) here is annoying and distracting.
But I do love a good post-apocalyptic flick, and while I Am Omega rates well below the best of the genre (The Road Warrior, Escape from New York, Dawn of the Dead, The Road, Monsters, Zombieland, the list goes on and on), it's worth a watch if you've got nothing better to do.

Overall thoughts:
Best movie in this set: Tyrannosaurus Wrecks
Worst movie in this set: 30,000 Leagues Under the Sea
Is this set worth buying?: Well, it cost me $10. That's $2 a movie. How can you regret that? The only truly unwatchable movie is 30,000 Leagues Under the Sea. The other four range from barely watchable (Army of the Dead) to okay (Transmorphers, I Am Omega) to cheesy good fun (Tyrannosaurus Wrecks). I doubt I'll be watching any of these movies again, but for $10 you can't go wrong.
Posted by fletchanator at 5:45 PM No comments: