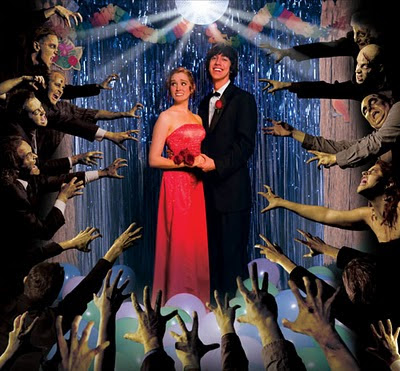 Dance of the Dead (2008)
Director: Gregg Bishop
Starring: Jared Kusnitz, Greyson Chadwick, Chandler Darby
Format: DVD
Observations:
- Hey look, a recent horror flick with a cast of "teens" that aren't fake-looking models. I already like this movie.
- The realistic casting and well-written high school hijinks gives this a vibe of Freaks and Geeks crossed with Animal House crossed with Dazed and Confused.
- That is, until the zombies show up. Then it only gets better!
- Braaaaains!
- Oops, Mitch lost his head.
- I see on IMDB that male lead Jared Kusnitz is also in Otis, another movie I'll be watching during 31 Nights of Terror 2011.
- Holy jumping zombies Batman!
- A car cigarette lighter as a weapon. "Don't move or I'll scorch you!".
- Zombie carjackers. I guess all the usual rules are out the window.
- I can honestly say that is the first time I have seen anyone do pro wrestling moves on a zombie. Awesome!
- I guess the saying "music soothes the savage beast" is true.
- Coach Keel is officially my favourite character in this.
- What prom would be complete without the band playing an 80s power ballad, right? "Shadows of the Night" by Pat Benatar - rockin' choice!
- Hey look, it's Mitch.
- Zombie sex looks painful.
- Cool guys (and gals) don't look back at explosions.

Overall thoughts:
I'm going to make this short. Dance of the Dead is a worthy entrant into the Zombie Horror Comedy Hall of Fame, alongside the likes of Shaun of the Dead, Zombieland and Return of the Living Dead. It does the simple things well. Realistic characters you care about. Comedy that is actually funny. Moments of suspense and gore. Good zombie effects. Effective camera work. It ticks all the boxes, making for a fun watch. And a great way to get the ball rolling on 31 Nights of Terror 2011!
Posted by fletchanator at 9:28 PM No comments:

Announcing 31 Nights of Terror... the sequel!

Hi everyone, sorry for my lack of blogging lately. The usual real life things have gotten in the way.

But that's about to change!

Back in 2008 I attempted the first 31 Nights of Terror marathon. My intention was to watch one horror movie every night for 31 consecutive nights leading up to Halloween.

I failed. I made it through 21 nights but found it too hard to commit to watching a movie every single night for a whole month. (You can read the marathon in its entirity in the blog archive).

But now I'm extremely happy to announce the revival of 31 Nights of Terror! It remains essentially the same - I will try to watch 31 horror movies in the month of October. But to make it a little easier on myself, I won't be watching *every* night. Some nights will have double features, others will be movie-free, but in the end it will still add up to 31 movies over the month.

What are the movies? Sorry, you'll just have to wait and see, but for the most part they will be movies I have either a) never seen, or b) haven't seen in a long time. Some will be on VHS and some on DVD. The only connecting thread is that they will all be horror flicks.

The only cheat I'm allowing is that I'm starting the marathon tonight, which is Friday September 30. I know, not technically October, but like I said it's a small cheat and doesn't ruin the spirit of the marathon.

As with my past movie marathons, I won't be writing full reviews of the movies I watch, but will instead post the notes I write while I watch, followed by a short summary of my overall thoughts.

So, stay tuned!
Posted by fletchanator at 11:54 AM No comments:

Posted by fletchanator at 11:52 AM No comments: 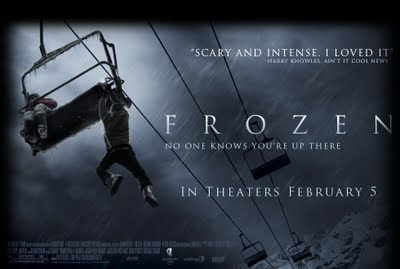 This is one of those movies I've been hearing good things about, but was worried wouldn't live up to the hype. I mean, it's a movie about three people being stuck on a ski-lift. How could that possibly be entertaining or terrifying?

Well, you know what? It is a good movie and in parts it does quite a good job of being scary/suspenseful/intense.

Adam Green (HATCHET) is developing quite a reputation as an up-and-coming horror director and there's plenty to admire about his work here. For a start Frozen was filmed entirely on location in the mountains. No sound stages here and no CGI - watch the main featurette in the special features of the DVD to see just how creative Green and his crew were in making the sparse script work.

The plot is, as I mentioned, simple. Three friends - played by Emma Bell (WALKING DEAD TV series), Shawn Ashmore (X-MEN series) and Kevin Zegers (DAWN OF THE DEAD remake) - sneak onto a ski-lift and through a series of bad luck end up stranded high above the ground while the ski resort closes for the week. What do they do? Jump? Try to climb along the wires? Wait it out? And what about the wolves circling below?

So, there's not much meat on the bones of this plot, which makes character development all the more important. Luckily the script and dialogue of Frozen do a good job of establishing the three main characters. The dynamic of two best mates and the "third wheel" girlfriend tagging along is entertaining in the build-up to the horror.

And once it starts the "survival horror" portion is full of tension, especially if you're scared of heights like me. There's also a few small moments of gore.

If you're a keen horror movie fan and think you've seen every possible scenario and setting, a flick like Frozen makes a refreshing change.

Posted by fletchanator at 7:07 PM No comments: