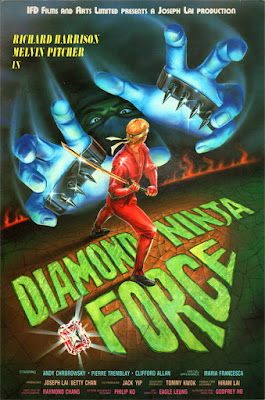 Plot: This is a Godfrey Ho movie... you expect plot? 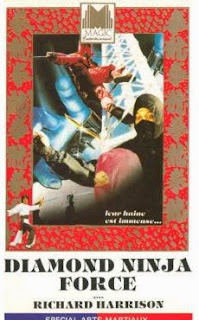 Also known as Ghost Ninja, this is one of the many 80s mash-ups that Godfrey Ho "directed", starring washed-up former sword-and-sandals star Richard Harrison (GIANTS OF ROME). As is usually the case, Ho takes an established movie, adds some newly-shot ninja scenes and voila, ninja mash-up goodness. But unusually he chose a Taiwanese horror movie to chop up, which actually works in this movie's favour.

Whereas the non-ninja portions of many of the Ho movies I've seen thus far tend to be a bit boring, that's not the case here. The Taiwanese horror bits are goofy as hell and a whole lot of fun. A family - including mum Fanny and son Bobo (dig those names man!) - finds their home haunted by a ghost, or ghosts (it's hard to tell) and all manner of campy low-rent Amityville Horror stuff happens to them. Some of it is quite adult in nature, so we get a strew of sex scenes and nudity. That does get a bit tedious, but it's saved by the variety of supernatural "special effects" which are downright hilarious. 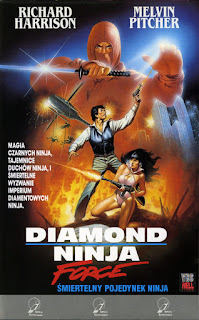 Meanwhile, the bad guy who summoned the "ghost ninja" to haunt the family and drive them off their land, accidentally(?) kills the girlfriend of badass ninja dude Harrison, a member of the titular Diamond Ninja Force. Naturally he vows revenge on the bad guys, leading to a series of "fights" interspersed between the haunting storyline - in each, Harrison shows up and kills a bad guy easily and without any blood (despite using swords and throwing stars). More haunting stuff, another fight, more haunting, another fight... rinse and repeat until the final showdown between Harrison and the main baddie.

Naturally this is a bad movie. The name Godfrey Ho essentially demands that. It has the usual awful dubbing and incoherent plotline (although more coherent than most Ho flicks), and everything else that lovers of bad cinema will revel in. And adding to its appeal is the fact the non-ninja portions are just as fun, not something that is common for Ho's masterpieces. Given that, I think this might be my favourite Godfrey Ho flick so far. I found it on a streaming website called Creepster.tv, but it's also available on Youtube.

Posted by fletchanator at 11:19 PM