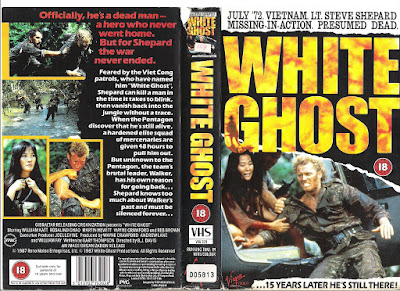 Plot: An M.I.A. US soldier nicknamed White Ghost (Katt) lives in hiding in the jungles of communist Vietnam. The US army finds out about him and sends a black ops team to rescue him. However, the team is lead by a man who wants White Ghost dead.

The Greatest American Hero was one of my favourite shows when I was a kid. The show aired from 1981 to 1983, when I was aged 6 through to 9, the perfect age to appreciate the show's wacky appeal. Hell, I just loved getting to see a live action caped superhero in action, even if he couldn't fly properly or use his superheroes to save himself. And that theme song... awesome. 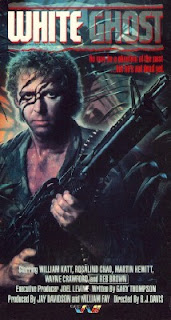 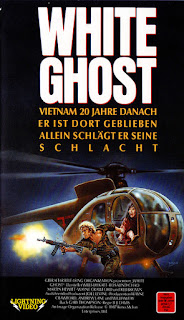 Lead star William Katt unfortunately faded into obscurity after the show's run, apart from showing up in a couple of the House horror/comedies I honestly couldn't tell you what he's been doing since. A look at his IMDB page shows that after Greatest American Hero he acted in a bunch of Perry Mason TV movies. Who knew? Well, luckily for us after that he chose White Ghost, a low-budget action flick that I happened to find in full on Youtube. The listing caught my eye because of one name - Reb Brown - an actor who I've raved about before on this blog for his bad, bad acting which is a sight to behold. Sadly Brown has only a small role in this, but despite that it's a good ol' time anyway.

Besides Brown and Katt, White Ghost also features Martin Hewitt (THE PARATROOPER), making for something of a bad-acting trinity. And it's directed by the guy who made the Brandon Lee vehicle Lazer Mission!

The storyline is part Missing in Action, part Predator (the team aspect, not the alien) and part Rambo. There are plenty of great cheesy moments, from Katt's frizzy mullet (which he unfortunately gets cut early in the piece) to the facepaint he dons that makes him look like the bassist from a Norwegian black metal band. After growing up on Katt as a comedic actor it's hard to take him seriously in a straight-forward action movie like this, and his facial expressions don't help. Let's just say his stoic face is more Alzheimer's patient than ass-kicking soldier.

The climax of White Ghost is typical of these movies, with all the explosions and gunfighting an action fan can wish for. My only complaint is the misuse of Reb Brown - he spends most of the movie in an office and only enters the jungle in the third act. He does get to brandish two machine guns and use his trademark yell, which I appreciate, but it's too little too late. I really wish they had cast Brown in the lead role (ala STRIKE COMMANDO) or at least in the main baddie role which instead went to Wayne Crawford (BARRACUDDA). But that complaint aside, White Ghost is a fun actioner - not quite as cheesy as classics like Strike Commando or Deadly Prey but worthwhile for fans of cheesy shoot-em-ups.